UPDATE: As of 5/2015 I have switched all of my locations to Peplink products for the router side of things.  I will be writing this up as soon as I can.  I still use Ubiquiti AP products for all of my WiFi networks at two locations, but I no longer use the Edge Router products due to limited support for a number of things.

UPDATE:  As of 10/15/2013 I’ve removed the Ubiquiti Edge Router from my network.  After repeated instability during high traffic loads (50Mb/sec or higher) and then finally a complete failure of the hardware, I’ve gone back to using pfSense on a Soekris net6501 platform.   So far I’ve seen faster performance, more stability, and more flexibility.

A few months ago, I was looking for a low power, low noise solution for a firewall at home, and stumbled across the Ubiquiti Edge Router Lite.

I had moved to Ubiquiti’s UniFi AP Pro for my wireless AP at home a few months before then, and was really impressed by their use of Linux and the overall product quality and configuration capabilities.

The Edge Router Lite is a relatively new product from Ubiquiti, and had a lot of negative comments in their forums about the initial versions of software being limited or unstable in various ways.  However, the later posts for the software version I’m running are far more positive.

My experience so far has been fantastic.  It’s super small, very light, and built very well.  It has an external power brick, but that is expected given it’s small size.  It runs what appears to be a derivative of Vyatta Linux, and has a lot of features.

What I have been most impressed with is it’s speed.  I have a 100Mbit up/down Internet connection, and I can get almost line rate without going much above 10% CPU utilization on the router.  It’s really quick to boot up as well, and configuration changes are very speedy.

The dashboards and views into statistics are great as well.  I can see near real time bandwidth usage which is much more granular than my 30 second polls from my PRTG network monitoring system.  Our new Roku3’s can fill up that 100Mbit pipe when first starting an HD video stream for about 5-10 seconds, which I rarely see in averaged stats from PRTG.

I have used the DHCP server, DNS server, have three different zones/ports configured, and some NAT’s as well.  All work as expected, and are pretty straightforward to configure as long as you research what you’re trying to do on the Ubiquiti forums.

I’d have to say that would be my biggest complaint – very poor or non-existent documentation on the product itself.  But that’s not unusual for Ubiquiti, as I’ve seen similar things with the ToughSwitch Pro and the UniFi products as well (more details on those coming in later posts).  They are known for having a thriving forum community as a replacement to all inclusive documentation, and that is a good thing in my opinion.  It can be a little limiting when you’re trying to setup a router, and have no access to the forums, but that is a 1st world problem…

One of the great things is how fast Ubiquiti comes out with new features and functionality.  I’ve seen this on their UniFi line, and can already see it happening here with EdgeOS, the name for their software stack.

Overall I am very happy with the product, and would recommend it to anyone looking for a compact, full featured standalone router that is capable of high speeds.

Sign in or become a SeaBits member to join the conversation.
Just enter your email below to get a log in link.

I finally had the opportunity to install something I purchased a while ago called CapsuleKong.  It’s a wonderful way to display Nespresso pods with a 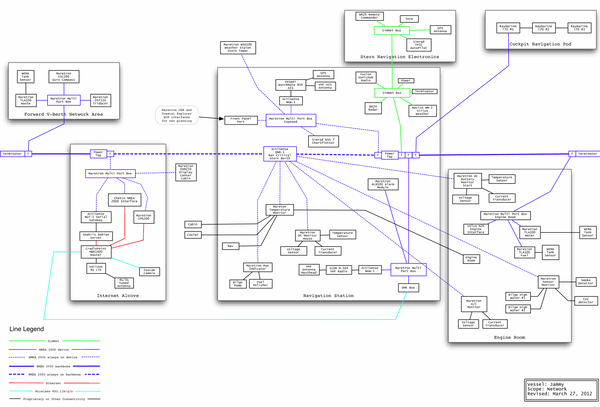 I continue to tweak my scripts and data collection on my NMEA 2000 server that I added to last year in Data collection from the sailboat.  They are not even